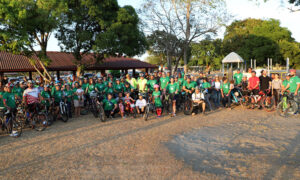 Panama City, 11 March 2019. During one of the weeks with heaviest traffic in Panama City due to the beginning of the school year, U.S. Embassy Panama invites the general audience to beat traffic jams with the ‘Panama Without Cars’ [#PanamaSinCarro] Initiative.

US Embassy Panama’s ‘Green Team’ invites residents of the Clayton neighborhood and surrounding areas to leave their cars at home on Wednesday 13 March and arrive at their schools and workplaces using bikes or walking. The ‘Panama Without Cars’ initiative also encourages carpooling or using public transportation on that day to reduce the amount of cars on the streets.

The embassies of The Netherlands and Germany, as well as the Movement of Street Cyclists of Panama (MCCP) are also joining the challenge to promote a cleaner air and a city with fewer traffic jams.

“The embassies and cyclists expect that ‘Panama Without Cars’ encourages Panama City residents from all neighborhoods to commute in a healthy and fun way, while producing less pollution and traffic jams,” said US Embassy Panama interim Chief of Mission Roxanne Cabral.

Those who take part in the ‘Panama Without Cars’ initiative will meet for a group picture at the Kiwanis Sports Complex, in the City of Knowledge, at 5:30 pm on Wednesday 13 March. Panamanian cyclist Juventino Quiroz, from MCCP, will provide advice on street cycling safety techniques and the event will finish with a gathering at the Kiwanis Sports Complex. US Embassy Panama will give away 50 bicycle helmets and/or t-shirts for the first 50 people who show up, either walking or on their bikes, for the group picture. 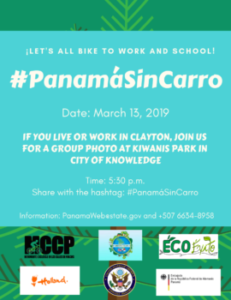