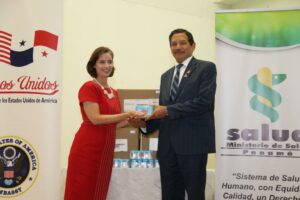 Panama City, 12 June 2019.- The Ministry of Health of Panama and the Embassy of the United States carried out a donation ceremony today, in which the health entity received antiretroviral medicine donations from United States President’s Emergency Plan for AIDS Relief (PEPFAR).

The contribution of the United States consists of 6,354 kits of antiviral therapy and 20,000 packages of rapid HIV tests. The medicines were donated to the Panamanian Health Ministry, whose seventeen antiretroviral therapy clinics attend close to 16,000 patients in the country.

As a result of this donation, the Ministry of Health for the first time will apply the antiretroviral medicine the top-line TLD [Tenofovir disoproxil fumarato, Lamiduvine, Dolutegravir] medication, which combines three antiretroviral medicines in a single daily pill, achieving suppression of the virus in the most efficient way and with minimal side effects. This United States contribution will allow nearly 500 patients to benefit from the medicine during one year. In addition, the donation will also allow 20,000 patients in Panama to benefit from a rapid and free HIV test.

PEPFAR is an initiative of the United States government to help and save lives at risk for HIV around the world. This initiative has helped Panama’s response to HIV during more than ten years.

“The United States and Panama have worked together for years to improve the health of people who live with HIV in Panama. With this contribution, we strengthen our commitment with Panama to maintain a constant supply of medicines for all who need it. This is a common challenge in which we are united. Together we can control HIV,” said U.S. Embassy Chargé d’Affairs, a.i., Roxanne Cabral.

During this act, the interim Chief of Mission symbolically donated a box of medicine to the Ministry of Health Vice Minister, Eric Uloa.

“Today we received in a very special manner the medicine TLD, in which we facilitate the management of patients in only one dose, improving the adherence and decreasing the resistance of the antiretrovirals.”

The Vice Minister stressed the antiretroviral therapy clinic tests are free, as well as the treatment, and added the Ministry of Health respects the rights of the patients under strict confidentiality.

The medicine donated by the United States plan will be stored in the central deposit of the Ministry of Health and will be distributed according to its STI-HIV-Hepatitis Program.