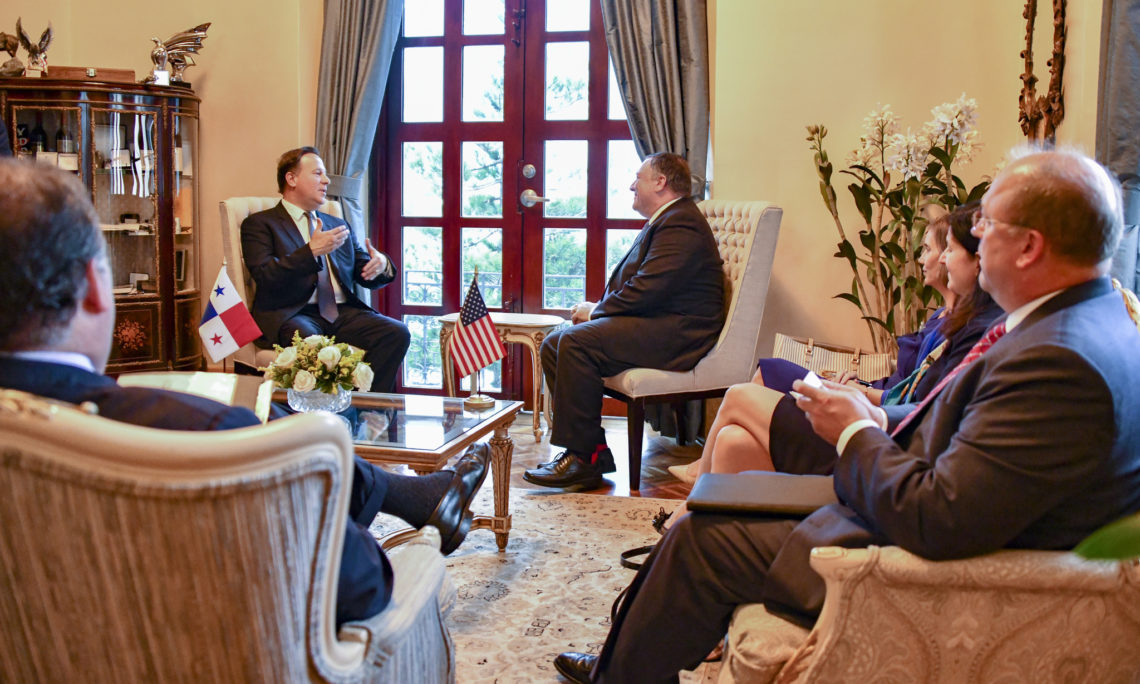 SECRETARY POMPEO: So I’d had on my list to go see President Varela for a while. It took me six months to get here. They have been an important partner of ours for a long time. I knew President Varela from my previous role as well. Economic ties, security ties, counternarcotics, all a lynchpin of our efforts in Central and South America. And so it was important, although we were just on the ground for a little bit, to get there to thank him for the work they’re doing and to remind them, and we had the chance to talk to some local media and remind the entire region, that when China comes calling it’s not always to the good of your citizens, and when they show up with a straight-up, legitimate investment that’s transparent and according to the rule of law, that’s called competition and it’s something that the United States welcomes, but when they show up with deals that seem to be too good to be true it’s often the case that they, in fact, are. So we had a good conversation about that as well.

QUESTION: Just the latest news, if you don’t mind, Secretary. The ABC is reporting that a Turkish official says he showed you a transcript of the tape, the purported tape, and that they played you the audio. Can you respond to that?

SECRETARY POMPEO: Yeah, we asked you to ask questions about Panama. Do you have a question about Panama?

QUESTION: I have a question about Mexico. It’s also been —

SECRETARY POMPEO: Happy to take your question about Mexico.

QUESTION: It’s also been reported that there’s been an agreement between Mexico and Guatemala, I think, on the border issue with the caravan coming up from Honduras. Do you have anything to say about that?

SECRETARY POMPEO: So we’re working on it. I just had a chance to speak with Foreign Secretary Videgaray about his work today at the United Nations. There’s still a fair amount of work. One of the things we hope to accomplish both with the existing government – I’ll get a chance to speak to the incoming foreign secretary, Marcelo Ebrard, here in just a little bit, if we can get everybody’s phone working right, so that we can do the good work we need to make sure that we have legal entrants and only legal entrants crossing our border.

SECRETARY POMPEO: Yeah, but I don’t want to say anything. We just – it’s a broader – but the importance isn’t that China is out competing in the world. We welcome that. It’s when the state-owned enterprises show up in a way that is clearly not transparent, clearly not market-driven, and is designed not to benefit the people of Panama but rather to benefit the Chinese Government. Those are the kind of things we think are both inappropriate and not good for the people of Panama or any other country where China is engaged in this kind of predatory economic activity.

QUESTION: Did you discuss the possibility of any greater collaboration between the U.S. and Panama as part of the bilateral agreements?

SECRETARY POMPEO: Yeah, we hope so. We want to expand trade with them and they certainly want to expand trade with us as well, and so we do, and we hope too – we hope we can improve the counternarcotics efforts. It matters to Panama a great deal and it matters to us as well. We have lots of narcotics transiting through, around, and adjacent to Panama, and it’s a regional effort, and Panama has been a critical supporter of our efforts and we hope our – we have been of theirs as well.

QUESTION: If I could ask you about Mexico again. The President tweeted about sending military troops to the border for the caravan. What’s the status of that, of those discussions or decisions?

SECRETARY POMPEO: Yeah, I don’t have anything to add to the President’s statement this morning other than to say we’re determined to do the things we need to do, and one of the things we need to do is get Congress to change the rules that we have in a way that – frankly, in a way that most other countries have in their rules too. It’s important that we secure our borders and the President has not only the State Department but DHS and others working to achieve that goal.

QUESTION: Do you feel there has been progress in terms of stopping the caravan before it gets to Mexico?

SECRETARY POMPEO: I always like to see it work before I take credit for any achievement, so let’s see. Let’s see what progress has been made and what progress we can make over the coming days. I will say that the Mexican Government is working in good faith to try and help achieve this.

MS NAUERT: All right, we’ve got to wrap it up.

QUESTION: Thank you for speaking with us.

SECRETARY POMPEO: Do you work for ABC?

SECRETARY POMPEO: You should actually ask them. They’re peers of yours. You should tell them that the Secretary of State is on the record saying this, and that they shouldn’t – they shouldn’t do that. This is wrong to do to the fiancé of Khashoggi. We should be factual when we’re reporting things about this. This is a very serious matter that we’re working diligently on. And so to put out headlines that are factually false does no one any good. You should encourage all your colleagues to behave that way. It’s most constructive when the media tells the truth. It’s very useful.

QUESTION: Thank you for taking the time to speak with us.