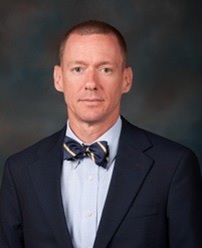 Philip Laidlaw joined the Department of State as a Foreign Service Officer in 1992.

Most recently, he served as Deputy Chief of Mission at the U.S. Embassy in Bogotá from 2016 to 2019.  Prior to that, he served as director of the Office of Policy Planning and Coordination in the Bureau of Western Hemisphere Affairs where he oversaw regional assistance budgets and strategic planning, political-military affairs, counternarcotics, democracy and human rights, global and multilateral issues, homeland security, cybersecurity, and race, ethnicity, and social inclusion issues.  He was the Chargé d’Affaires at Embassy Caracas from 2013 to 2014.  He has also served as deputy director of the Office of Andean Affairs.  His other overseas assignments include Tirana, Sarajevo, Madrid, La Paz, and San Salvador.

Laidlaw is from St. Augustine, Florida.  He earned his Bachelor’s degree in Mathematics and Economics at Wake Forest University in 1989 and received a Master’s degree in National Security Strategy from the National War College in 2011.