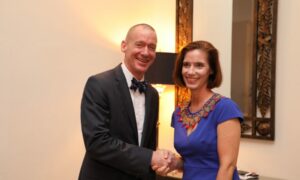 Panama City, 15 January 2020. – Following the confirmation of Roxanne Cabral as U.S. Ambassador to the Republic of the Marshall Islands, the U.S. Department of State assigned Philip Laidlaw as Chargé d’Affaires, ad interim, of the U.S. Embassy in Panama.

“My family and I will treasure the warmth of the Panamanian people, the country’s beautiful nature and culture, and the historic ties between Panama and the United States.  I wish Panama a prosperous future, as a model of democracy and economic growth in the region, driven by the noble and joyful spirit of the Panamanian people,” said Ambassador Cabral at her farewell reception while introducing Philip Laidlaw as the new Chargé d’Affaires.

Chargé Cabral thoroughly traveled the country, visiting Peace Corps volunteers in the Ngabe-Bugle comarca, Darien, and Bocas del Toro.  There, she participated in health trainings in indigenous communities and supported Peace Corps environmental programs to identify and address environmental needs, as well as English learning programs to build professional and life skills.  She climbed the Baru volcano, guided by visually impaired hikers from Trekking Panama, and slept under the stars in Cerro Naipe Embera community in Darien, where she saw first-hand the results of the U.S.-Panama Conservation Funds for Darien and Chagres.

During Mrs. Cabral’s period as Chargé d’Affaires, the United States remained Panama’s principal trading partner with nearly $7 billion in two-way trade; the number one user of the Panama Canal with 68 percent of transits; and the number one investor with $4.7 billion and more than 150 U.S. companies.  The United States also remains the number one destination for Panamanian students to study abroad.  During Cabral’s time in Panama, the U.S. Embassy facilitated more than 10 million dollars’ worth of educational exchange programs for local students and professionals to study at U.S. universities.  Through its English Access Microscholarship Program, the Embassy funded comprehensive after-school education programs to more than 200 high-school students a year, helping to prepare them as future candidates for enrollment at U.S. institutions.

Under Chargé Cabral’s leadership, diplomatic efforts in security cooperation led to the creation of multiple joint U.S.-Panama task forces, which increased border security in both countries by deterring illicit migration, combatting the trafficking of people and drugs, and preventing potential terrorists from moving freely in the region.  Additionally, the United States invested $60 million in training and equipment annually, including six helicopters and two speedboats in 2019, to increase Panamanian security forces’ counternarcotics capabilities and strengthen our important security partnership.

Chargé Cabral continued the United States’ commitment to providing humanitarian aid to Panamanians in need.  In 2019, the United States donated over 6,000 bottles of anti-retroviral medicine and 20,000 rapid HIV test kits for distribution in areas with high HIV/AIDS rates.  The doctors on the hospital ship USNS Comfort attended more than 6,000 patients during its five-day stay in Panama.  Also, the ‘Mercury’ emergency preparedness exercise and the ‘Darien Lift’ exercise allowed the transportation of approximately 850,000 pounds of medicines and construction materials to remote areas.

Mrs. Cabral led the Embassy team in the Panama sin Carro initiative and rode her bike to work every day to encourage people to leave their cars at home, in an effort to move in the city in a greener and healthier direction.  While in Panama, she also celebrated the 25th anniversary of the U.S.-Panama Commission for the Eradication and Prevention of Screwworms.  The Commission has successfully reduced the damage and economic loss caused by screwworms in the region, from Panama to the United States.  Panama’s cattle industry has saved $1.5 million per year due to the eradication of screwworms.

Although Chargé Cabral is departing Panama, she leaves behind a strong U.S. Embassy institution, which will be led by Philip Laidlaw.  Laidlaw is a career U.S. diplomat with nearly 28 years of service at the Department of State.  He arrives in Panama after more than three years as Deputy Chief of Mission at U.S. Embassy Colombia.  His previous assignments in the region include Chargé d’Affaires at U.S. Embassy Venezuela, and tours in Bolivia and El Salvador.  He has also had assignments in Spain, Albania, and Bosnia and Herzegovina, and Washington, D.C.

Philip Laidlaw’s assignment as Chargé d’Affaires, a.i., at the U.S. Embassy in Panama is effective as of 14 January.