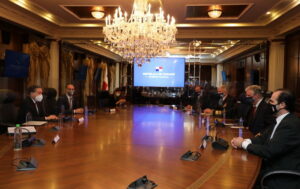 Panama City, August 17, 2020.- U.S. National Security Advisor Robert O’Brien visited Panama to fulfill a promise made by President Trump to work together with Panama, one of our strongest regional partners, to address the COVID-19 pandemic. The United States has provided $4.4 million in assistance to support Panama’s response to COVID-19. O’Brien was joined by the Commander of the U.S. SOUTHCOM, Admiral Craig Faller; the NSC Senior Director for Western Hemisphere Affairs Mauricio Claver-Carone, and CEO of the U.S. International Development Finance Corporation Adam Boehler. During the visit, Ambassador O’Brien announced the signing of the expansion of the América Crece Memorandum of Understanding to foster economic growth in Panama; discussed the creation of a U.S.-Panama Task Force to combat money laundering and corruption; and oversaw the donation of 50 ventilators, 6,600 testing kits, and other needed COVID-19 related supplies to Panama.

Ambassador O’Brien met with President Cortizo at the Presidential Palace, where they discussed COVID-19 assistance, economic growth, the fight against money laundering and terrorist financing, and increased security cooperation. After the meeting, the United States and Panama announced the signing of an expanded Memorandum of Understanding (MOU) under the flagship América Crece program, which expands our current engagement on energy and seeks to catalyze private sector investment in infrastructure. Panama was the first country to sign an MOU under América Crece in 2018, which was focused on energy infrastructure. The expanded MOU will further channel resources and expertise from U.S. government agencies to spur job creation and economic activity across all types of infrastructure projects in Panama. 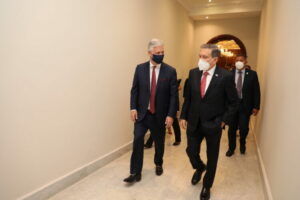 Cortizo and O’Brien also discussed the signing of an MOU to establish an Anti-Money Laundering/Corruption Task Force. The Task Force consists of Panamanian prosecutors, law enforcement, and regulatory officials, who will be trained and advised by personnel from the Federal Bureau of Investigation (FBI). The Task Force will target money laundering networks, including non-narcotics related networks, and strengthen capacity to investigate, disrupt, and prosecute money laundering and corruption.

During his visit, Ambassador O’Brien also participated in the donation of 50 ventilators, COVID-19 testing kits, and personal protective equipment (PPE) from the United States to Panama. This donation fulfills President Trump’s promise to President Cortizo during their call in May, reinforcing U.S. commitment to supporting Panama in handling the COVID-19 pandemic. The U.S. Agency for International Development (USAID) funded the ventilators and the COVID test kits for donation; the Department of Defense’s Southern Command donated the personal protective equipment. 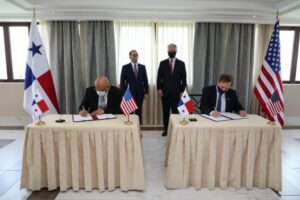 Ambassador O’Brien exclaimed that “Today, on behalf of President Trump, I am proud to donate 50 U.S-made ventilators and other medical resources to the Government of Panama to bolster its COVID-19 response. The United States is honored to stand with Panama and the Panamanian people as we combat the novel coronavirus together.”

This donation was part of the COVID-19 assistance the United States has provided to Panama since the beginning of the pandemic, strengthening Panama’s health system and supporting the work of the security forces, judicial system, and communities throughout the country. The 50 Zoll EMV+ ventilators will be distributed in public hospitals nationwide to reinforce local efforts to treat critically ill patients and save lives, reducing COVID-19 deaths in Panama.

The U.S. government has cooperated with civil society, private sector businesses, non-government organizations (NGOs), the Departments of State and Defense, USAID, to move materials and technical assistance to where they are needed.