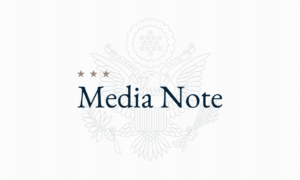 The text of the following statement was released by the Governments of the United States of America and the Interim Government of the Bolivarian Republic of Venezuela.

We, the Government of the United States and the Interim Government of the Bolivarian Republic of Venezuela, recognize the degradation of rule of law in Venezuela due to the illegitimate Maduro regime’s lack of will  to stop drug trafficking and root out the criminal elements that exploit every corner of Venezuela.  We assess that Nicolas Maduro, the illegitimate Venezuelan dictator and drug kingpin, represents a danger for the stability of the whole region, not just Venezuela.  To promote security for the Venezuelan people and our hemisphere, Maduro’s illegitimate narco-regime should be held accountable and face justice for its crimes.

To this end, our two governments remain committed to stemming the transshipment of drugs via Venezuela, preventing illicit drug cultivation and consumption, combating the endemic corruption of regime officials, and impeding the money laundering and criminal networks related to the illegal trade of commodities.

On November 24, 2020, we gathered with like-minded countries for a working meeting on addressing transnational crime, narcotrafficking, and other related illicit activities facilitated by the lack of rule of law in Venezuela.  Following this meeting, the Government of the United States and the Interim Government of the Bolivarian Republic of Venezuela expressed support for the following cooperation principles: