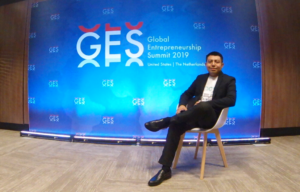 Panama City, 6 June 2019.- The Panamanian programmer, Kelvin Alvarado, was selected among thousands of entrepreneurs from around the world to participate in the Global Summit of Entrepreneurship (GES), which is celebrated from June 3 to 5 in The Hague, Netherlands. In this summit, political leaders, business owners, and investors from the entire world met to share their experiences and boost entrepreneurs from 120 countries. GES looks for projects proposing novel solutions in areas of agriculture, food, connectivity, energy, health, and water.

Kelvin Alvarado is a Panamanian scholarship grantee of the SUSI program and is the founder of Anay, a business that developed the ‘Guna [Panamanian indigenous community] Dictionary’ application, whose objective is to close the gap of communication and help education in Guna communities. This app is a technological tool that facilitates communication in Guna Yala in medical tours and tourism projects. Alvarado explained that the app was inspired by his personal experiences when he arrived at the university in Panama’s capital after living and being educated in the Guna Yala indigenous reservation, after he spotted a gap in communication that exists in his community because his mother tongue is Guna and not Spanish.

“I grew up as a Guna boy running in an island and wanted to serve as an inspiration to the children in indigenous towns that know that they can go far. I had challenges and did not get discouraged,” Kelvin Alvarado said. “But the only way in which one can go far is education. The place where you come from doesn’t matter, the most important is how you support your community, your country, the world, with your knowledge.”

Alvarado is a software developer who graduated from the Technological University of Panama. He won the scholarship for the SUSI program in the United States in 2018 and is a part of the YLAI network of youth entrepreneurs.

During his participation in GES, the Panamanian programmer had the opportunity to promote his project among international investors and learn the experiences of renowned businessmen from around the world.