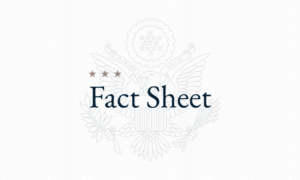 Beijing is the world’s largest emitter of greenhouse gases; the largest source of marine debris; the worst perpetrators of illegal, unreported, and unregulated (IUU) fishing; and the world’s largest consumer of trafficked wildlife and timber products.  While the Chinese people have suffered the worst environmental impacts of its actions, Beijing also threatens the global economy and global health by unsustainably exploiting natural resources and exporting its willful disregard for the environment through its One Belt One Road initiative.  Tragically, the Chinese Communist Party (CCP) represses civil society and a free press, slowing changes that would benefit its citizens and people all over the world.  As Secretary of State Mike Pompeo has said, “Too much of the Chinese Communist Party’s economy is built on willful disregard for air, land, and water quality. The Chinese people–and the world–deserve better.”

Despite claims of international environmental leadership, China’s energy-related carbon dioxide (CO2) emissions are rising.  It has been the world’s largest annual greenhouse gas (GHG) emitter since 2006.  China’s total emissions are twice that of the United States and nearly one third of all emissions globally.  Beijing’s energy-related emissions increased more than 80 percent between 2005-2019, while U.S. energy-related emissions have decreased by more than 15 percent.  In 2019 alone, China’s energy-related CO2 emissions increased more than 3 percent, while the United States’ decreased by 2 percent.  Beijing claims “developing-country” status to avoid shouldering more responsibility for reducing GHG emissions–though its per capita CO2 emissions have already reached the level of many high-income countries.  China’s increasing emissions counteract the progress of many other countries around the world to reduce global emissions.

Through the Montreal Protocol, the nations of the world agreed to phase out production of substances that damage the ozone layer.  But scientists identified an increase of emissions of the phased-out, ozone-depleting substance CFC-11 from Eastern China from 2014 to 2017.  The United States leads the international response and continues to push China to live up to its obligations and increase its monitoring and enforcement efforts.

In 2008, U.S. diplomats installed air quality monitors on top of U.S. Embassy Beijing.  We shared the data publicly and revealed what local residents already knew: Beijing’s air quality was dangerously worse than the Chinese government was willing to admit.  That small act of transparency helped catalyze a revolution in air quality management, and Beijing has since made air quality a priority, including establishing new ambient air quality standards.  Despite significant improvements in large cities, the overall level of air pollution in China remains unhealthy, and air pollution from China continues to affect downwind countries.

The Department of State works to mitigate the global threat of air pollution through diplomacy, policy leadership, and targeted foreign assistance to advance U.S. objectives and incorporate innovative technologies into diplomatic and development programs while shaping markets to support U.S. exports. We will continue to advance U.S. interests globally through existing international agreements on air quality, including the Convention on Long Range Transboundary Air Pollution (LRTAP) and shape efforts on air quality in the UN Environment Programme (UNEP).  We will expand our work to build capacity to improve air quality management and shape markets for U.S. technology through the Air Quality Program, which currently manages twelve large air quality grants with a combined budget of $6.6 million.

China’s unsafe industrial processes also make it the world’s greatest emitter of mercury, a neurotoxin and a major public health threat when allowed to pollute air, water, and soil.  China leads the world in mercury air pollution from its own coal-burning power plants, as well as the plants that Chinese state-owned companies finance, build, and operate in other countries.  The United States was the first country to join the 2013 Minamata Convention on Mercury, an international agreement that seeks to protect human health and the environment by comprehensively addressing mercury sources, trade, its use in products, emissions, storage, and waste.  In addition, the U.S. Department of State’s Mercury Program funds projects to promote better environmental practices among artisanal and small-scale gold miners (ASGM), reducing the use of mercury used while maintaining or increasing the miners’ recovery of gold.  The program also funds projects to reduce mercury emissions from coal combustion.  The People’s Republic of China (PRC) is also Party to the Minamata Convention on Mercury, yet it continues to enable its citizens to promote mercury use in ASGM in many developing countries.

China is indisputably the world’s largest consumer of legal and illegal wildlife, and it was identified as a Focus Country under the Eliminate, Neutralize, and Disrupt (END) Wildlife Trafficking Act.  Wildlife trafficking is a serious transnational crime that threatens security, fuels corruption, robs communities of legitimate economic livelihoods, pushes species to the brink of extinction, and spreads disease.  The United States has long called for the Chinese Communist Party (CCP) to improve its behavior on combating wildlife trafficking and has secured diplomatic successes such as a near-complete ban on Chinese government-sanctioned ivory trade in 2017.  The United States calls upon the CCP to permanently end sales of high-risk wildlife in wet markets, a move that would reduce the use of trafficked wildlife and wildlife products.

China is the world’s largest consumer of illegal timber products.  It drives illegal logging in producer countries, feeds associated trade in illegally harvested products worth $52-157 billion per year, and fuels corruption and transnational organized crime.  In addition, Chinese investment in foreign infrastructure and natural resource sectors use unfair economic practices, disregard environmental and social safeguards, and target countries with weak oversight and enforcement institutions that make them susceptible to predatory Chinese extraction.  These irresponsible development practices contribute to deforestation and land degradation and undercut the legitimate forest industry around the globe.  China should follow the lead of the United States and others and implement a comprehensive ban on illegal timber imports.

China is the biggest producer and exporter of plastic products, accounting for nearly 30 percent of the world’s total.  A 2019 comprehensive literature review by Tianjin University estimates China is the world’s leading generator of plastic waste.  At least 13 percent of China’s domestic plastic waste is unmanaged and released or dumped directly into the environment as pollution, translating into millions of tons per year.  While the Chinese Communist Party (CCP) previously supported global plastic recycling, the “National Sword” policy (which took effect in 2018) severely restricted the import of recyclable plastic scrap and disrupted the global plastic scrap trade.  Now, most plastic scrap, which China had imported before 2018, is landfilled, incinerated, or processed by developing countries ill-suited to manage the sudden increase, ultimately further straining ecosystems.  The United States supports environmentally sound management of all waste and scrap and promotes sustainable materials management (SMM), a systematic approach to using and reusing materials more productively over their entire life cycles.

China’s One Belt One Road Initiative

China’s signature One Belt One Road Initiative (OBOR), more commonly known as the Belt and Road Initiative (BRI), aspires to create a network of enhanced overland and maritime trade routes to better link China with the world.  However, implementation of BRI lacks clear environmental guidelines, safety standards, and worker protections.  Many BRI-funded projects do not meet international standards, leaving countries to deal with the harmful consequences long after a project is completed.  Environmental safeguards depend on the laws of host countries, and Beijing is leading nations away from developing their economies sustainably.  In recent years, Chinese-backed projects on several continents have displaced local populations, negatively affected water quality, polluted adjacent land, and spoiled fragile ecosystems.  Many planned Chinese infrastructure projects worldwide would do similar harm.  The World Wildlife Fund (WWF) has found BRI corridors overlap with over 1,700 critical biodiversity sites and the ranges of 265 threatened species that could be adversely affected by BRI  projects.  A study published in Nature Sustainability suggested BRI projects may lead to “permanent environmental degradation” due to environmental harm through pollution, habitat loss, and wildlife mortality, among others.

China is the world’s largest emitter of marine plastic debris.  According to its own experts, China released up to one million tons of plastic waste into the ocean in 2017.  The presence of plastics in the ocean costs the maritime, fishing, and tourism industries billions of dollars every year and threatens food security and public health.  According to a 2020 Asia Pacific Economic Cooperation (APEC) forum report, the damage from marine debris to APEC member economies was estimated at over $11 billion in 2015 alone.

China is placing increased pressure on global fish stocks through unsustainable fishing practices.  The Chinese Communist Party (CCP) subsidizes the world’s largest fishing fleet, including one of the largest distant-water fishing fleets operating on the high seas and in other countries’ waters.  Chinese vessels routinely violate the sovereign rights and jurisdiction of other coastal States, fish without permission, and overfish licensing agreements.  Despite Beijing’s claiming a “zero-tolerance” policy when it comes to these issues, the problems are widespread.  China is one of the world’s worst perpetrators of illegal, unreported, and unregulated fishing (IUU), disregarding international fisheries management measures.  In response, the United States is developing new tools and working with international partners to ensure global fishing is legal and sustainable, while encouraging the CCP to more effectively and transparently police the activities of its fleets and hold violators accountable.

China’s operation of its cascade of mega dams, opaque water management practices, and unilateral alteration of water flow in the upstream portion of the Mekong River have resulted in catastrophic consequences for its downstream neighbors.  In December 2019 at the Mekong Research Symposium, researchers presented troubling evidence regarding China’s manipulation of the Mekong River’s flows for the past 25 years.  Further analyses of publicly available satellite data and Mekong River Commission river height record confirmed that the greatest disruption in natural flows coincided with major dam construction and operation, exacerbated drought conditions, and contributed to immeasurable damage to fishing and agriculture.  These problems are compounded by the PRC’s failure to share critical water flow data, without which Mekong region nations cannot effectively manage water resources or prepare for and mitigate the impacts of floods and droughts.  The United States urges China to deliver on its recent commitment to share year-round water data and work in concert with the Mekong River Commission (MRC) to capitalize on existing partnerships and platforms for data sharing, including the MRC’s Data and Information Sharing Platform and the MWDI’s MekongWater.org.

For further information and resources, visit the website of the Bureau of Oceans and International Environmental and Scientific Affairs (OES).  For press inquiries, contact OES-PA-DG@state.gov.