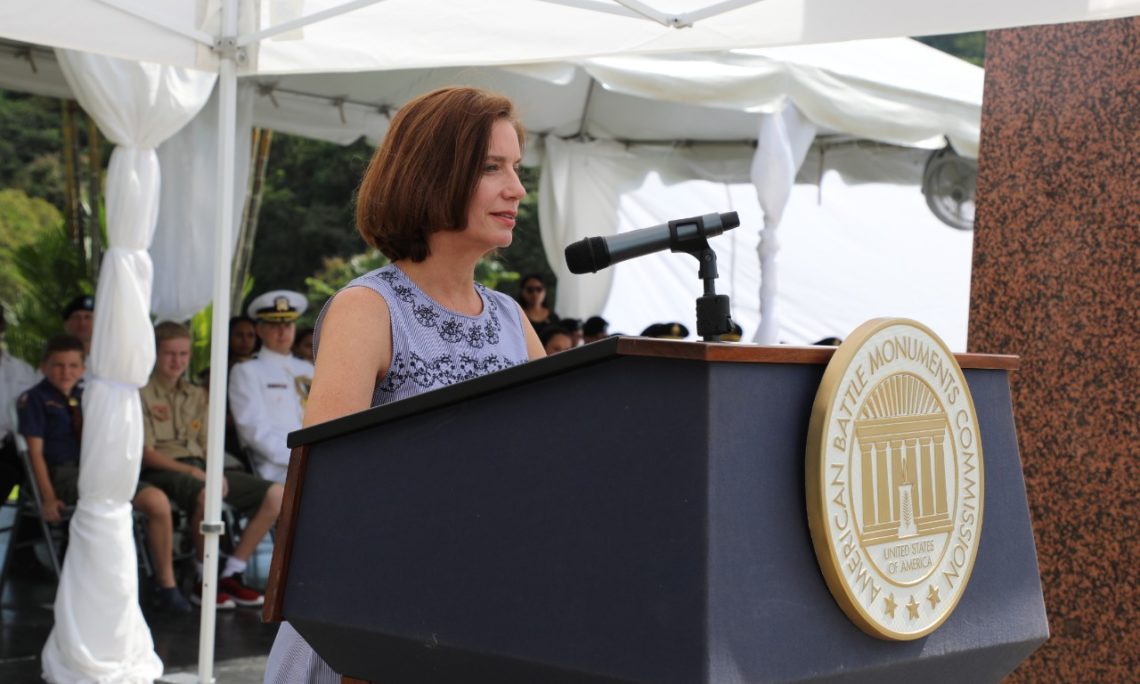 Muy buenos días, my fellow Americans, amigos panameños, members of the Diplomatic Corps, veterans, colleagues, friends, and family members. Thank you all for being here today.

I want to give a special thanks to the Veterans of Foreign Wars, the Ladies Auxiliary, the American Legion, the Scottish Rites, the Abou Saad Shriners, the United States Navy League, the American Society, and the Republicans and Democrats Abroad for participating in today’s wreath laying. Your dedication is greatly appreciated.

To the Girl and Boy Scouts and all the volunteers, thank you for placing the American and Panamanian flags on the graves. I know it was tedious work and you had to get up early on a Saturday, but the place looks remarkable.

This year marks the 100th anniversary of the end of the fighting in World War I, and the 80th anniversary of how we celebrate Veterans Day today. A day dedicated to the cause of world peace and to honor America’s veterans for their patriotism, love of country, and willingness to serve and sacrifice for the common good. Today, around the world the cemeteries and monuments administered by the American Battle Monuments Commission are honoring our veterans with events similar to ours. But, our Corozal cemetery stands out in a distinct way from the 55 other sites administered by the ABMC.

First, as the obelisk behind me explains, this cemetery is not only to pay tribute to veterans of the Armed Forces, but also to those who contributed to the construction, operation and maintenance of the Panama Canal. Today we have with us two very special people who are not only veterans but are contributing in their own ways to the continued success of the Panama Canal.

The first one is Mr. Stacy Hatfield, a U.S. veteran who served as a sergeant in the U.S. Army for several years including an assignment in Panama, during which, and I’m guessing, his love of Panama was first sparked. He is our guest speaker today and is currently the General Manager of the Manzanillo International Terminal container port in Colon.

The second person is Mr. Oliver Villalobos, a retired Marine who is currently serving as Superintendent of this amazing Corozal cemetery. But… only for a few more hours. Later today, Oliver, Denise and their four dogs, will be moving to Paris where Oliver will take on a regional supervisory role at the American Battle Monuments Commission. As most of you know, Oliver has been instrumental in many efforts to promote stronger Panamanian and American ties through activities at this cemetery. You might have seen the news about Oliver and the Embassy’s quest to disinter the Civil War Hero Julius Kroehl, who invented the submarine. His remains will soon be buried here at Corozal Cemetery. Oliver and his team were also in the news just last week, when they broke ground on a $1 million dollar project to improve the drainage on this 16-acre cemetery and surrounding neighborhood. Best of all, the water that used to flood these areas will now drain into the Panama Canal.

Oliver, you have done an amazing job here and you and Denise will be missed. Since Panama is included in your area of responsibilities, we know this isn’t goodbye, but rather, hasta luego. Thank you for your service to our country, Oliver, and I thank all of you for coming today to pay tribute to our brave veterans.