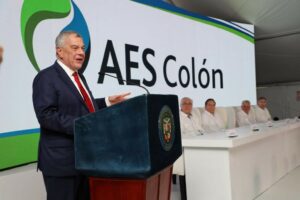 Thank you and good morning.  It’s wonderful to be back in Panama. My first trip abroad as a U.S. diplomat was to Panama. After 48 years, my first trip as Acting Assistant Secretary of State for Western Hemisphere Affairs is to Panama. You cannot help but be impressed with the progress. Panamanians have built so much, solidifying your role as a global transportation center and important financial hub. Our two countries have worked together to build an excellent relationship – both between the two governments and between the two peoples. Together, we collaborate closely not only to build strong democratic institutions, security, and economic prosperity for the citizens of both our countries. We also seek to help those in other countries who share our common values and aspirations.

It is not by happenstance that it’s here in Panama that we inaugurated the first natural gas power plant in Central America. Nor is it surprising that now we are inaugurating the first full-scale receiving terminal in the region.  Spurring economic growth and increasing prosperity for all our citizens has long been the focus of so much of the collaboration of our respective governments. These facilities are just the latest shining example.

They are funded with U.S. private investment, which has come here because of the investment climate Panama has created. The 1.15-billion-dollar AES Colón project is helping Panama develop its economy. It will also help diversify Panama’s energy matrix, using the first clean liquid natural gas (LNG) imports to Central America from the United States.  Its inauguration today represents a key step for the people of Panama to become an LNG hub.  It also opens a new era for Panama’s role in regional economic and energy development — one that promises to generate significant benefits to the entire hemisphere.  We expect the AES Colón project to expand the use of LNG exports from the United States — to drive economic development — and to shape a cleaner, more cost-effective energy future in the region.

The infrastructure AES has developed will allow Panama to generate electricity with a more reliable and much cleaner fuel source. It will reduce reliance on expensive and dirty fuel oil and diesel.  This will increase the flexibility of Panama’s electricity generation system and allow the country to integrate large-scale intermittent renewable energy into its grid.

We are taking initiatives to promote other projects like this in the future.  The U.S.-Panama MOU that we signed last year when the AES Colón plant opened is part of the U.S. government-led initiative called America Crece or Growth in the Americas.  This initiative will catalyze private sector capital to help the region realize its energy and infrastructure needs.  It is spurring economic growth and energy security for the region. As in so many other things, Panama was the leader, the first signatory.  Collaboration under this agreement has already improved the national electricity transmission company’s sovereign credit rating. That alone has saved the Panamanian taxpayers $47 million.

We will launch an expansion of the America Crece initiative next month at the Asia Pacific Economic Cooperation summit in Chile.  There is a strong demand for infrastructure investment, that is transparent, sustainable, and financially sound. Private capital is the key to developing sound energy solutions. America Crece will pave the way for more investments like this one.

In closing, I would like to congratulate the people of Panama on the national progress that is so evident to old friends like me. I   thank the government of Panama and the leadership of the AES Corporation for making this transformative initiative possible.  President Cortizo, you can count on the United States as we continue to collaborate to advance prosperity for Panamanians, U.S. citizens, and all citizens throughout the hemisphere.