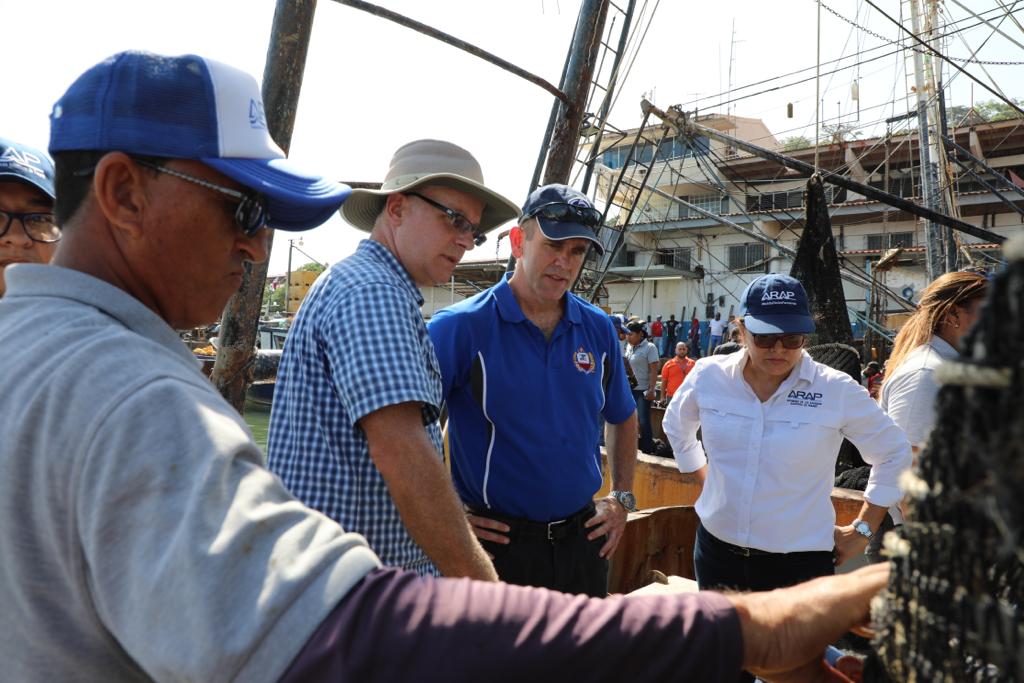 Deputy Chief of Mission of the Embassy of the United States, Ryan Rowlands (center), along with NOAA and ARAP staff, participated in the inspections of the TED device in the port of Vacamonte.

Vacamonte, 18 June 2019.- U.S. officials participated as an observer during Panamanian authorities inspections of shrimp boats in the port Vacamonte, to confirm the proper use of the Turtle Exclusion Device, known as TED. The device, which allows turtles to escape if they become trapped in shrimp nets, is mandatory according to Panamanian Law 82 of 2005 and is a requirement for shrimp exports to the United States.

Panama is included in the list of 35 countries leading shrimp exports the United States, ranking on the 13th position with an average of $32.5 million annually in the last five years. Panamanian shrimp businesses received a TED certificate for its adequate use of this device.

The National Oceanic and Atmospheric Administration (NOAA) and the Bureau of Oceans and International Environmental and Scientific Affairs (OES)  of the Department of State joined officials from Panama’s Authority of Aquatic Resources (ARAP) during the inspections today.

Capture, death, and injury caused by shrimp farm operations remain as primary threats against sea turtles. This system consists of incorporating an opening to the net that, when hit by large marine animals like turtles and sharks, expels them while the crustaceans stay trapped.

This collaboration of NOAA, OES and ARAP strengthens the commitment of Panama and the United States to combat the traffic of wildlife and foster good practices of sustainable commerce.